Zuma’s Zondo rambles may yet zap him – Hoffman 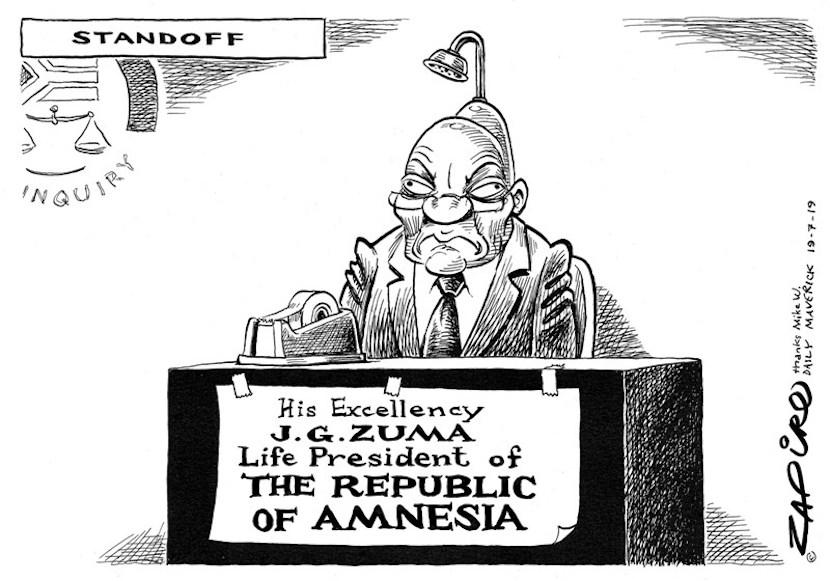 Paul Hoffman, SC, applies his astute legal mind to former President Jacob Zuma’s evasive testimony with its shoal of red herrings and shot through with half-truths, extracting clues as to what Deputy Chief Justice Raymond Zondo might find. The founder of Accountability Now starts by outlining, chapter and verse, several half-truths put forward by Zuma in that now-infamous rambling opening monologue and/or during questioning. Like shrewd politicians the world over, Msholozi knows that the best fibs contain an element of credible truth. Stitch enough of them together and you have a Bell-Pottinger-like narrative of a patriotic statesman crucified for doing his selfless best to uplift the dispossessed masses. His followers certainly buy it and the Zuptoids eagerly sell it, via the very instruments Hoffman identifies as having been unconstitutionally set up. Like the discredited apartheid-era National Party before it, Zuma’s ANC required an effective propaganda machine. What better way to achieve this than to get its business contacts to bankroll one. ANN7 and the “New Age’’ newspaper resulted, courtesy of the Guptas. Except that Msholozi’s admissions in this regard already put him beyond the Constitutional pale. His lawyers would do well to read Hoffman before slapping an electronic ankle bracelet on Zuma to alert them if he gets within 100 metres of the Zondo Commission again. – Chris Bateman

Counsel for former president Jacob Zuma rose first thing on Monday morning, 15 July 2019, to inform the Zondo Commission that he did not know what his client was going to say in the witness box. He was not only protecting his own professional reputation, he was warning those still interested enough to follow the proceedings that anything was possible. Duly sworn in, Zuma did not disappoint.

He commenced with a rambling unprepared monologue consisting of half-completed sentences, paranoid ruminations, fanciful accusations of conspiracies to “get Zuma” via lies, spies and the “Zuma tapes”. The victim card was played so often that it became difficult to sort fact from fiction. Professing to want to “save the country” (echoed outside by Carl Niehaus of MKMVA), left some observers wondering “from what, if not from what the Zuma-ites have wrought?”

The half-truths piled up rapidly. Yes, Judge Squires did correct the error that he had described the relationship between Zuma and his former financial advisor, Schabir Shaik as “generally corrupt” in his judgment, but, he also convicted Shaik for corrupting Zuma and sentenced him to 15 years imprisonment, an outcome that successfully withstood the scrutiny of both the Supreme Court of Appeal and the Constitutional Court. Correct: Redi Tlhabi has written a book about the Zuma rape trial, but, no she is not involved in producing a movie called “Raped by Power” in the USA. Indeed, a simply Google search reveals that, as far as Google is concerned, no such movie is in the pipeline. Also, raising his rape acquittal, which has nothing to do with the mandate of the commission, does not assist Zuma because his acquittal was secured on the basis that the sexual intercourse he had with the young complainant was reasonably, possibly consensual. Zuma’s own version of the alleged rape does him no credit, but it did earn him the Zapiro shower head. Yes, he did lose the Nkandla case, but no, he was not required to pay for security enhancements himself, on the contrary, he escaped with a nominal payment for some of the non-security enhancements when, in law, he should be made to pay for all of them.

One could go on and on, the disclaimer by his counsel was both well-timed and appropriate.

There are two relevant and major respects in which the answers given by Zuma to questions put by long-suffering evidence leader Paul Pretorius SC reveal that Zuma has all too often opened his mouth in the witness box to change feet.

He confesses that the idea of launching “The New Age” newspaper and later the “ANN 7” television channel was something he suggested to his good friends and ANC comrades, the Gupta brothers. He might well, he concedes, have asked Government Communication and Information System (GCIS) boss, Themba Maseko, to help the Guptas in their venture, he certainly told Luthuli House about the scheme, but not cabinet. A propaganda machine for Luthuli House is what Zuma clearly had in mind. A means of countering negative publicity about the ANC was, in his estimation, sorely needed.

The problem is that as President of the country, Zuma was constitutionally required to avoid the risk of a conflict of interest between his official duties (running the country) and his private interests (helping his friends the Guptas in setting up their new business suggested by him). Zuma has, in effect, confessed to being in breach of section 96(2) of the Constitution and of the executive ethics code.

Using state resources to advance the interests of the Gupta pro-ANC propaganda machinery is simply unconstitutional, illegal and improper, whether in the form of sponsored breakfasts or diversion of state advertising to that machinery. A system of procurement that is fair, equitable, transparent, competitive and cost-effective is constitutionally required. Zuma appears to be blithely unaware of his high obligations and duties as head of state and head of the national executive.

It is on the related topic of cadre deployment that the evidence given by Zuma is most useful to the Commission. Accountability Now has long contended that the system of cadre deployment used by Luthuli House-based ‘cadre deployment committees’ is illegal and unconstitutional. In order to work around the celebrated Mlokoti judgment which confirmed this proposition of law, the ANC now says Luthuli House merely “recommends” and government then appoints senior civil servants and leadership of state owned enterprises. This blatant work-around solution won’t do. It is the business of Luthuli House to select politicians from the lowliest municipal councillor to the mightiest president. It is, constitutionally speaking, solely the business of government and state-owned enterprises to effect appointments of staff. Luthuli House has no business or role in ensuring that “our people”, as the cadres were (accurately) called by Zuma (with his ANC hat hanging on his shower head), secure the plum jobs in the public administration and SOEs. Lest there be any doubt, understand well that a cadre is a card-carrying member of the ANC and that the work of cadre deployment committees is carried out opaquely in smoke-filled back rooms at Luthuli House, presided over by the Deputy President, wearing his ANC hat.

It has previously been argued that cadre deployment is a cause of state capture as well as being illegal, so it is not as though Zuma was caught unawares when he was questioned about the practices of the ANC as regards cadre deployment.

Indeed, the governing alliance routinely ignores the Constitution in order to pursue its private interest in securing what it Leninistically calls “hegemonic control of all the levers of power in society”. That particular style of democratic centralism has not succeeded anywhere that it has been tried, worldwide, and, more importantly, it is deeply inconsistent with the values of the Constitution.

It appears from Zuma’s evidence that the Constitution was, and is, routinely ignored and flouted by the governing ANC alliance’s delinquents to effect the deployment of loyal ANC “cadres” in the public administration and the SOEs. That loyalty was easily transmogrified into the state capture project’s “parallel processes” run by the ANC’s Jacob Zuma faction from Luthuli House with ample support from the executive and legislature, Hogan included. She has no reason to lie about the Gama debacle in which Zuma insisted upon the appointment of a grossly unsuitable cadre to Transnet, nor has Zuma assailed her credibility. On the contrary, civil servants loyal to their country and to the late Collins Chabane have given the lie to Zuma’s evidence.

The Constitution requires the cultivation of good human resource management practices in the public administration and SOEs. It also requires cabinet members not to act in any way that is inconsistent with their high public office or to expose themselves to the risk of a conflict between their official responsibilities and their private interests. Nor may they improperly benefit any other person. It is surely improper to insist on Gama’s appointment at a time when he was facing serious disciplinary procedures. Hence the denials by Zuma.

The cabinet members’ oaths of office require them to uphold the Constitution, not undermine it with the deployment of frequently unsuitable and under-qualified cadres who just happen to be loyal members of the ANC.

Cadre deployment has long been declared illegal in the high court. There was no appeal against this, and rightly so. The aims of the ANC NDR or “national democratic revolution” are radically at odds with the requirements of the Constitution. The “revolution” may be regarded as a “private interest” of those who subscribe to its eternally unsatisfied longing for hegemonic control of all the levers of power in society.

The evidence of Zuma about the pervasiveness of cadre deployment in the public administration and state owned enterprises lays a foundation for further finding these practices illegal and for a historic judicial recommendation that they be desisted from in future. Their continuation poses a central threat to South Africa’s social and economic viability and would facilitate state capture too.