How Shaun Abrahams is cooking his goose – Is the prosecutions boss fit for the high office he holds?

Question: Does a truly independent chief prosecutor meet with the president (and other cabinet members) of his country on the eve of summonsing a cabinet  minister (not present) on charges of fraud and theft, holding the meeting at political party offices?

The office of the National Director of Public Prosecutions is arguably the highest post in the public administration of SA; it is certainly at the pinnacle of the criminal justice administration, if it is assumed, as it should be, that the judiciary is not part of the public administration. This argument is based on the NDPP being the only public servant clothed with the power to make prosecution policy and is also because no other public servant is empowered to make policy on any matter. Usually policy is the task and responsibility of the relevant member of cabinet. In relation to the National Prosecuting Authority the position is somewhat different. The Minister of Justice only has what is called “final responsibility over the prosecuting authority”.

The way in which the NDPP is constitutionally obliged to make prosecution policy is with the concurrence of the minister responsible for the administration of justice and after consultation with the Directors of Public Prosecutions. In addition to these unique policy making powers of the NDPP, his office is also clothed with the power to review any “decision to prosecute or not to prosecute.”

It follows that the appointee to the office of the NDPP should be an appropriately qualified and fit and proper person who is capable of discharging the rather awesome responsibilities it entails. This appointment is made by the President as head of the national executive. It means that the choice of appointee is, at best, mediated by the cabinet but is not subject to the type of sifting processes for which the Judicial Service Commission has become famous over the years.

It is a well-established fact that President Zuma has not shown any great talent for making appropriate appointments. He is so conflicted, compromised and allegedly corrupt (according to the 783 counts formulated by the NPA as it existed before he became president) that he is actually incapable of making appropriate appointments. This predicament applies with particular force in the criminal justice administration given that it has the task of prosecuting him. The disgraced chiefs of police, Bheki Cele and the hapless Riah Phiyega are examples of Zuma’s poor choices, as are mendacious Menzi Simelane, a previous NDPP whose appointment was set aside by the courts as irrational, given his propensity to lie under oath and Berning Ntlemeza, whose appointment as Hawks boss is under judicial review.

After Simelane was removed there was a long interregnum, probably because the president was unable to identify a suitably malleable candidate who would help keep him out of jail. Eventually, after a little encouragement from CASAC, in the form of an application to compel him to appoint a permanent NDPP, Mloxisi Nxasana was plucked from the obscurity of the side-bar in KZN to relieve long-acting Adv. Nomgcobo Jiba. This only lasted 22 months. In that period Nxasana, in the course of trying to do his job properly, found it necessary to complain to the General Council of the Bar that three of his senior personnel are not fit to be advocates of the High Court. Subsequently both Jiba and Lawrence Mwribi have been struck off the roll of advocates by the High Court. They are currently on special leave pending the outcome of appeal proceedings. The “resignation” of Nxasana is the subject matter of civil review proceedings and also criminal charges of corrupt activities against Zuma and his justice minister, the trajectory of which will be informed by the outcome of the review.

Into the void left by Nxasana’s untimely departure stepped Shaun Abrahams, unlike his two predecessors, a career prosecutor of youthful vintage. It was hoped that his assurances that he would act independently and in a manner that does justice to the constitutional injunction that the NPA exercise its functions without fear, favour or prejudice would not ring hollow.

In the short space of time that Abrahams has been in office he has contrived to withdraw charges against Jiba in circumstances that do not withstand objective scrutiny. He has also spent an inordinate amount of time and effort on the complaints of Tom Monyane, the SARS supremo, who is at loggerheads with his minister over the restructuring of SARS and the legality of an investigative unit set up in 2007 within SARS. Abrahams has also failed to attend to a backlog of some 3000 cases referred to him via the Auditor General which arise out of corrupt activities in the procurement system of the public administration. The latter failure is the subject of a complaint of maladministration filed with the Public Protector by Accountability Now.

Abrahams has also made himself complicit in the persecution of the minister of finance, Pravin Gordhan, who has long been in the cross hairs of the Hawks. Unable to find anything wrong with the establishment of the so-called “rogue unit” thus far, Abrahams has summonsed Gordhan and two co-accused on charges of fraud and theft in relation to the early retirement package of Ivan Pillay, a former deputy commissioner at SARS.

These charges have been described as legally flawed and factually unfounded by FUL and the HSF in a detailed letter of demand to Abrahams in which the NPA stands accused of “conscious recklessness or ulterior purposes” in so charging with “devastating consequences for the Republic and its economy.” They make it clear that legal proceedings will follow if Abrahams is unable to give a coherent and accountable explanation for charging a sitting minister by 21 October 2016. No such explanation has been forthcoming.

Coming from left field, Matthews Phosa, a loyal senior ANC member and former Premier of Mpumalanga, has asked the Bar to take proceedings to have Abrahams struck off the roll of advocates. Advocates who are struck off are those who are found by the courts to no longer be “fit and proper” persons to be officers of the court. Integrity, dignity, the possession of technical skills and knowledge, respect for legal order and a sense of fairness are the attributes of a person fit and proper to be admitted as an advocate. If, on a balance of probabilities, a court decides that misconduct is proved, it has the discretion to determine fitness for office and to decide whether striking off or some lesser sanction is appropriate.

It is obvious that devastation of the economy has resulted from the Abrahams “war-talk” that accompanied the charging of the minister. Whether recklessness or ulterior motive is proved against Abrahams will depend on his response (if any) to the letter of demand but mainly whether he persists with the charges. It is possible that he has made a terrible mistake by allowing the summons to be served and that he can save his skin by recanting and withdrawing the charges.

Should he persist with the case in the face of the trenchant, well-reasoned and factually sound criticism of the conduct of the NPA, it is likely that he will cook his goose and that Phosa’s complaint will be acted on via proceedings to strike him from the roll of advocates as a person unfit to continue to be an advocate. The capture of the NPA by forces not aligned to constitutionalism and the rule of law is unconscionable and intolerable.

– Paul Hoffman SC is a director of Accountability Now and is author of the forthcoming book “Confronting the Corrupt”,  published by Tafelberg, due out early November 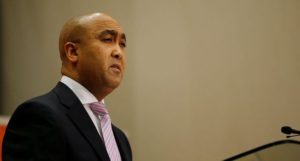