Jacob Zuma: feckless leader or embodiment of the NDR?

If the 2016 municipal elections go down in history as a referendum on the person whose face was used by the ANC on its election posters in them, the question is whether Jacob Zuma must be blamed for its poor showing or whether the choices made by the organisation itself are the real cause of the fall in its popularity at the polls. Make no mistake: for a dominant governing alliance (ANC, Cosatu and SACP) to find itself in a position in which it is within a mere 5% of losing its overall nationwide majority, with the trend in recent elections steadily eroding its urban support, ought to be alarming to its general leadership if not to the leader himself. Is Jacob Zuma unintentionally converting his allies in politics into a minority rural grouping of nationalist traditionalists or is he faithfully following the dictates of their strategy and tactics to realise the “national democratic revolution” which is intended to usher in their fabled “national democratic society”? One in which they will enjoy hegemonic control of all the levers of power, both public and private.

The numbers, of which there are many, don’t lie. The overall support of the ANC led alliance has dipped to under 55% in the country as a whole. It has lost its previous majority in three of the metropoles and fared particularly badly in opposition held Cape Town, where its nemesis, the DA, was able to amass 66% of the popular vote, the most convincing win in any metropole in the country by any party. As the possibility of opposition led coalitions being formed in the remaining three metropoles in Gauteng looms large, there must be great consternation at Luthuli House.

Jacob Zuma is a consummate political survivor. Dead and buried in the wake of the conviction of his financial adviser in 2005 ( a sentence of 15 years for corrupting Zuma was imposed and confirmed in two appeals ), acquitted on charges of raping a deceased struggle comrade’s daughter, who is HIV positive – to his knowledge – in 2006, and triumphant at Polokwane in 2007, his pre-presidential cv is remarkable.

No less remarkable is his career since taking leadership of the ANC at its December 2007 conference. First, he managed to persuade an acting head of the National Prosecuting Authority to withdrawn 783 charges of corruption, fraud, money laundering and racketeering against him, thus smoothing the way to his election in 2009 as president of the country. This is an outcome that was feared by his predecessor but one, Thabo Mbeki, in whose view, as recorded by Mark Gevisser in the authoritative biography “The Dream Deferred”, Zuma has no regard for the rule of law or the constitution. While it is so that the decision not to prosecute him has been set aside, this, given the appeal procedures of snail-paced complexity available to him, has not yet impacted negatively on his hold on the leadership of the ANC. This speaks more of the attitude of its National Executive Committee, allegedly captured by Zuma, than of Zuma’s dilatory and recalcitrant approach to litigation.

At present Zuma is in the eye of the storm that has so humbled his political party at the polls. But there are other matters of concern to those who continue to tolerate him as their leader:

As four brave young women protesters reminded the nation on Saturday evening, even on his own version, the Kwezi rape case in which he was acquitted, does nothing to promote the probity, morality and integrity of Zuma.

The choice facing the NEC of the ANC at this stage is whether or not to soldier on under the leadership of Zuma, despite the various matters highlighted above. The list is a “rap-sheet” of worrisome length and wide scope. Should the decision be made to persevere with Zuma as leader, the electorate will second guess that decision in 2019. Given the present trends, especially in the urban areas, it is unlikely that the people’s choice will endorse the decision to remain under the leadership of Zuma until then.

Accordingly, it does not really matter whether Zuma is a feckless leader (an accusation levelled at him by John Kane-Berman) or a hero of the national democratic revolution. The bread and butter issues that inform the decisions of voters on where to place their cross on the ballot paper will, if current trends continue, be to vote for change at national level in the same way as so many of them voted for change at local level last week.

Paul Hoffman SC is a director of Accountability Now 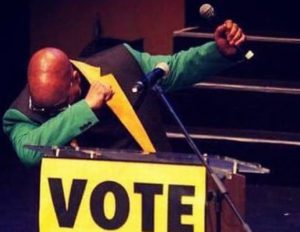