CAPE TOWN — Every business in South Africa should check out their moral compass, clean up their act, (if necessary), and then get behind a corruption-busting Integrity Commission – or face us all ‘graduating into something terminal’. The cautionary quote comes from none other than our Chief Justice while the appeal comes from Paul Hoffman, SC, Director of Accountability Now and author of “Confronting the Corrupt”. He cites the behavioural truth that if most people (80% the pundits say), think they can get away with doing something corrupt, they will do so – and rely on the culture of impunity. However, witness Bell Pottinger, KPMG, the list of global companies which believed they could get away with aiding and abetting the looting of the fiscus. It grows weekly. Getting on the right side of the integrity fence before the prevailing moral turpitude gets its Karmic come-uppance makes moral and business sense. Alternatively, risk riding the wave of Zuptoid sludge, and rely on the current dispensation to protect you. I love the way Hoffman describes the ruling elite’s commissions of enquiry, in particular SARS. Duck and dive, defer and delay, the inevitable exposure. Read about his failsafe solution below. Hopefully any new national leader of integrity will avoid publicly uttering the words “never again’’. – Chris Bateman

While the morally principled stances of Sygnia, which has cut all ties with KPMG because of its role in Guptagate, and Professor Iraj Abedian, who resigned from the board of Munich Re rather than be associated with the decision of the company not to sever its auditor/client relationship with KPMG, are welcome signs that the business community is awakening to the deleterious effects of meekly tolerating corruption, are these steps enough? Johann Rupert’s railing against the prevalence of theft in the country – by calling “radical economic transformation” code for “theft”, may be a reasonably accurate description of what those who embrace the slogan are up to, but is it patriotic to scare potential foreign investors off with talk of this kind? 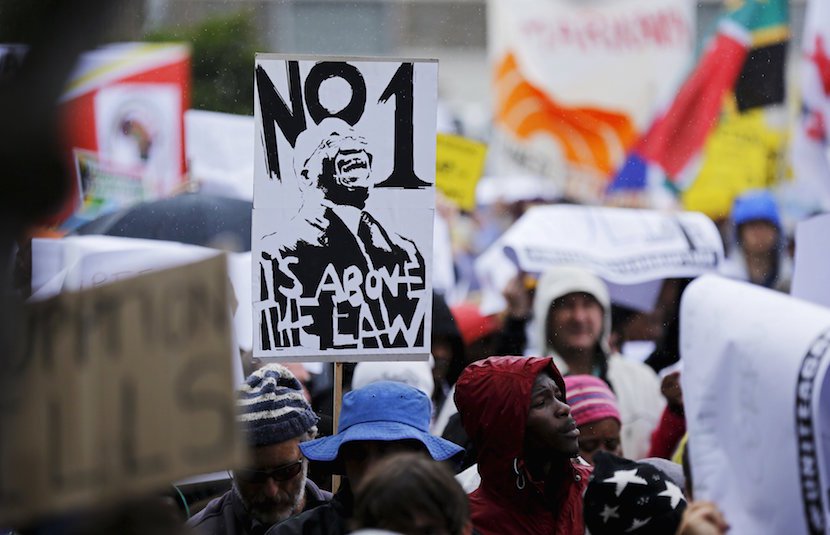 It would seem that there is too much focus on the ever emerging symptoms of corruption, GuptaLeak by GuptaLeak, and insufficient attention is being paid to the causes of the phenomenon of corruption and its spread.

The science applicable is fascinating. Apparently, in any given large population 10% of people are always corrupt, 10% are never corrupt (the Biznews readers perhaps?) and the remaining 80% could be corruptible if the circumstances in society are conducive to corruption with impunity. In other words, if most people think that they can get away with doing something that is corrupt, they will do it and rely on the culture of impunity in their society to escape the consequences of their, essentially unethical, moral and legal turpitude.

The consequences for society when this type of atmosphere is prevalent, as it appears to be in SA at the moment, are dire. Some describe corruption as “theft from the poor”. This appellation is certainly accurate when the corruption takes place in the public procurement of goods and services, as it does on an ever expanding basis in SA today. The failure of proper, or even adequate, delivery of services as a consequence of the diversion of funds, meant to uplift the poor, into the pockets of the corrupt leads to protest action, destruction of public property and a downward spiral from which it is difficult for society to emerge unscathed.

It is evident that there is a culture of impunity in various quarters of the political and business elite in SA today. The GuptaLeaks show that the public purse is regarded as the personal piggy bank of far too many players in business, government and the state owned enterprises.

What is to be done?

It is certainly helpful to take a stance against the symptoms of corruption that have corroded the probity of as esteemed an organisation as KPMG. Clearly those involved with the Guptas within KPMG thought that they would be able to get away with it due to the privileged status of those close to the ubiquitous “Number one”. The GuptaLeaks have exposed them, somewhat against the run of play. The resignations and apologies from KPMG are insufficient to properly address the enormity of the damage that has been done to SARS and to the fabric of SA society by the Zuptoids. Quite understandably, Pravin Gordhan is on the warpath. 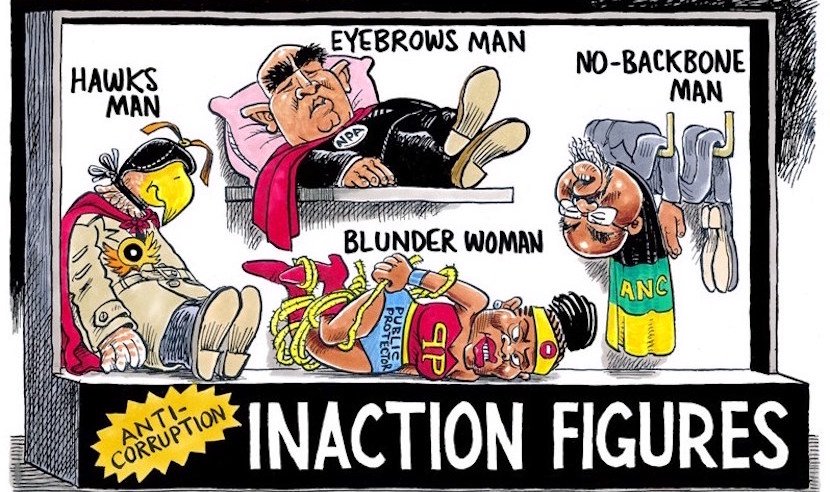 But there have been no arrests, the need for a commission of inquiry is bogged down in legal wrangling that enables the corrupt to duck and dive, deny, defer and delay the inevitable exposure of their wickedness. They know, on the examples of the travelgate fraudsters, the likes of Dinah Pule and Bheki Cele, that they will ultimately get away with their depravities by behaving with bare-fared brazen-ness.  Pule, she of the red shoes, was allowed to retire gracefully, having “suffered enough” (in the publicly uttered words of Ben Turok, who should know better) while the reward of Cele for leasing police headquarters at three times the going rate was a deputy ministership and no criminal consequences whatsoever. In the Zuma arms deals infested atmosphere of the political leadership of the ANC, festooned with “smallanyana skeletons”, a known convicted fraudster is treated as a hero. He was marched in and out of prison carried shoulder high by the adoring ululating cadres, and now sits on the NEC of the ANC between drunken driving appearances in the lower courts. Tony Yengeni would surely have difficulty with a lifestyle audit, but no one dares. No wonder corruption burgeons with examples like these everywhere in the public service and management of state owned enterprises.

The causes of this culture of entitlement and impunity are many and varied. But, there is one factor that is undeniably central to addressing the root of the trouble. Unless SA puts in place the type of anti-corruption machinery of state that the Constitutional Court has prescribed, in binding terms, for our government, we are all on a hiding to nothing no matter how bravely we react to the symptoms of the corruption. It is common cause that corruption is rife and, in the words of the Chief Justice, “in danger of graduating into something terminal”.

This danger can be addressed by everyone paying greater attention to the everyday implementation of the criteria laid down for effective anti-corruption machinery of state. Any conduct of the state that is inconsistent with the criteria is invalid, and can be impugned by returning to court to remind those in authority of what is required of them.

There are five basic criteria that are required of the single entity charged with the eradication (Chief Justice’s noun) of corruption. They are encapsulated in the acronym STIRS. A specialised unit, dedicated to the pursuit of the corrupt to the exclusion of all other tasks. A trained staff smart enough to outwit the corrupt. An operationally and structurally independent unit, capable of functioning without fear, favour or prejudice (ie, fear of the powerful, favour to the friendly or prejudice to the public weal) free of political interference or outside influence. A unit that is adequately resourced in a manner that is guaranteed is required. And, finally, unlike the Scorpions of old, the unit has to enjoy security of tenure of office. A mere creature of statute will not do (and in the case of the Hawks has been a complete failure) because a simple majority in parliament will be able to vote for its dissolution, as happened to the Scorpions. This single step, taken the moment the Zuma faction took power in the ANC, has set the combating of corruption back many years in SA.

The Constitution is structured in a way that ought to make corruption impossible, if its values of openness, accountability and responsiveness are taken seriously. A public administration that takes the principles of good governance set out in Section 195 to heart cannot possibly be corrupt.

Those who have fought in the trenches of the litigation to secure the criteria set are satisfied that the Hawks do no cut in constitutionally speaking. They are not specialised, indeed, they are required to deal with all manner of priority crime. Their staff is not trained sufficiently, their independence is lacking and they are under-resourced. Since 2014 they have had three leaders, and not one has retired in the normal course. The security of tenure of the likes of General Johann Booysen in KZN and Shadrack Sibiya in Gauteng is not of the calibre required by the court.

There is a need for the establishment of an Integrity Commission as a new Chapter Nine Institution, one which can prevent, combat, investigate and prosecute serious corruption in all its forms. Answerable to parliament (like the other chapter nines), not the executive, and immune to closure by a simple majority of parliament, the members of the unit would be in a position to put an end to the entitlement syndrome and the culture of impunity.

In addition to railing against the symptoms of corruption as they emerge, the business community of SA would be well advised to get behind Accountability Now’s campaign to establish an Integrity Commission. It is the right thing to do.

Article published in Biznews on 18 September 2017