Two knifemen claiming to be acting in the name of God beheaded an 85-year-old priest in Normandy this week.

In Jerusalem, troops destroyed the homes of 11 Palestinian families leading to clashes in which several Palestinians were wounded.

In Mogadishu, a suicide bomber killed 13 people outside a United Nations office. In Aleppo, the United Nations called for a “critical” 48-hour ceasefire to ease the desperate plight of 200 000 civilians trapped in Syria’s all-but-destroyed second city.

In Florida, two people died and 17 were injured after gunmen opened fire outside a Fort Myers nightclub – the latest in a string of mass shootings stretching back to Columbine High School in Colorado in 1999…

These acts of public violence and terrorism that we are witnessing across the world today are symptomatic of a shrinking global village led by people who prioritise their own interests above those of the rest of the human family.

Morality, our ability to discern right from wrong, and to seek and receive forgiveness, are among the characteristics that set us apart as a species. Love and compassion are in our DNA.

The development of technology has placed us all within reach of one another, but, instead of being led to understand and embrace each other, for our common good, we find ourselves embroiled in the pursuit of much narrower agendas.

Over my long lifetime I have been privileged to witness the advance of the concepts of human rights and universal justice.

But 71 years after the end of the Second World War and establishment of the United Nations, 60 years after the Montgomery Bus Boycott that came to define the US Civil Rights Movement, 49 years after Israel occupied the West Bank and Gaza Strip, and 22 years since the demise of apartheid in South Africa symbolised the end of European domination over Africa, our world faces unprecedented levels of immorality, inequity, intolerance, insecurity, prejudice, greed, corruption – and impunity.

Instead of viewing the ghastly 9/11 attacks on US civilians as a sign of the necessity to build bridges, today, 15 years after the horrendous attacks, we have been led to the edge of the abyss.

Bombs continue to rain from the skies above Syria, Iraq, Libya and Afghanistan, forcing more and more civilians to flee their homes. People in Somalia and Nigeria are likewise being forced into migrancy. And, on the streets of our cities – from Baghdad to Kabul, from Damascus to Gaza City and from Istanbul to Dallas to Paris to Munich – the global village is lurching from one incident of indiscriminate violence to the next.

Some of the perpetrators claim to be pursuing “just” military objectives; some, spiritual objectives; some acting in opposition to racism, economic or social injustice – and some are responding to their perceived or actual estrangement from society.

They have collectively triggered unprecedented levels of human migration, suffering and insecurity, and are contributing – daily – to a growing sense of immorality and crisis of leadership across the world.

Righteous people are asking: What do we do to turn back the tide of hatred, corruption and destruction? To whom do we turn for peace and security, for morality, and environmental and social sustainability?

Thankfully, we harbour the answers within ourselves, in acknowledging our inter-dependence. In understanding how much we need each other. Whether we are rich or poor, white, black, pink or green, Muslim, Jewish, Christian or Buddhist, from north or south…

When the Cold War ended and the world surfed into the new global era on a giant wave of technology, people collectively failed to understand the structural and human impacts. We were quick to identify short-term economic opportunities, new free-trade zones, tax havens and financial tools to enable money to flow freely across the planet, but slow to embrace those members of the family we regarded as “other”. And, slow to comprehend the vacuum in checks and balances created by the reduction from two global super-powers to one.

Instead of entering the global village with grace and in humility – which is what set Nelson Mandela apart after ascending to South Africa’s presidency – some of the politically and economically powerful began to believe they were invulnerable.

The invasions of Afghanistan and Iraq that followed 9/11 were breathtaking in their shortsightedness and cost, while the ongoing protection of Israel and the territories it occupies, at the expense of Palestine, is a fundamental cause of global friction, as are access to fossil fuels – and, as climate change begins to bite, to water.

The human family has entered a phase of growing recklessness and willingness to disregard the rights of others, to grab resources and resort to violence to make their arguments or settle their differences.

Humanity is crying out for good leaders, role models with the skills, compassion and sense of justice to hear the cries of their neighbours, to reconcile differences in the human family and share the earth’s resources so that all can eat.

I am very sad.

As a young priest I travelled to the United States to meet leaders of the civil rights movement, and rejoiced in their victories over prejudice and discrimination. Today, I battle to reconcile that joy with the disproportionate number of African Americans in prison and being shot in the streets.

I spent much of my life opposing apartheid in South Africa, and was later given the honour of leading the country’s Truth and Reconciliation Commission. Today, the reconciliation project is on the backburner, inequity remains pervasive, and our leaders – like those of the rest of the world – have failed to emulate Mr Mandela’s selflessness.

I have had the privilege of being called to travel widely, to interact with leaders and paupers, and contribute where I could for justice and human rights. Today, the fabric of communities and cities is under threat from gunmen and bombers with a total disregard for the rights of anyone else.

Instead of asking how we may be contributing to turning back the immorality pandemic, we seek stealthier weapons, more draconian security solutions, and more economic prosperity for ourselves.

In effect, instead of reconciling anything, we are unravelling the human family. We are closing our eyes to our commonality, to our common purpose and our common interest. We are disavowing the love and compassion with which we were born. We are subverting the fact that we are made for inter-dependence.

If you want to make peace, you speak to your enemy. You don’t shoot him or her. You don’t raise your voice; improve your argument, my father would have quite correctly advised.

I am an old man now. I pray for signs before I die of a new type of world leadership that eschews economic, ethnic, regional or religious dominance. I pray for a new cadre of leaders who make peace and equity in the global village, on earth, a priority.

If I don’t see these signs I will die of a broken heart. 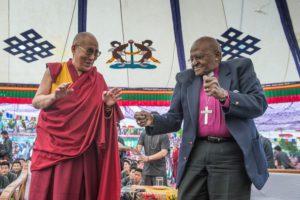