The controversial National Prosecuting Authority Amendment Act and the South African Police Services Amendment Act bring about respectively the demise of Directorate of Special Operation (DSO) or the Scorpions, as they are known to the public, and the creation of a new unit to deal with, inter alia, organised crime to replace the Scorpions. This […]

If one takes into account that the economy of the United States is about 100 times the size of the South African economy, that the World Bank has its tentacles in every nook and cranny of the global economy and that South Africa is part of that global economy, then it is plain that it […]

The appropriate starting point for discussing the legislative and other measures actually taken since 1994 is the origin of them all: section 9 (2) itself. It is part of the equality provision set out in the Bill of Rights. This is a provision which is central to the achievement of the constitutional goals of the […]

If we take as our starting point, as we must, that the new South Africa is a non-racist, non-sexist democracy in which equality is a guaranteed right and unfair discrimination is frowned upon to such an extent that discrimination on grounds of race or gender is regarded to be unfair (unless it is established that […]

Accountability Now is devoted to ensuring that the rule of law is upheld and enforced for the good of all by ensuring that governments, parastatals and the private sector are held to account. 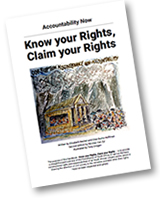